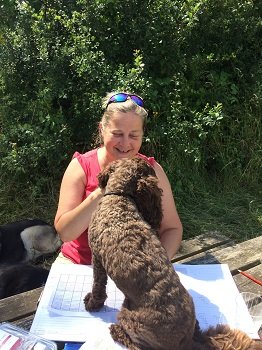 A few words from Billie

My family have always had dogs which is why I feel comfortable when I am with them. Our first family dog was a beautiful Irish Setter called Fred. He travelled the world with us until he became too old to do so. He was then looked after by a lovely family locally and we found out that he would regularly wander down to The Bull, Streatley for half a pint and then go back home!

After Fred we had a Boxer named Bella and a Heinz 57 called Tigre.   The next lot of dogs were then all Alsatians called Marmite, Dumpy and Paso. Marmite was owned by the police in Nigeria and while we were looking after her she had six puppies, 3 of whom were white when they were first born - just like little polar bears!

I am now happily settled in Goring with 2 daughters,  2 cats (Rogue & Dizzy), a guinea pig and 2 tortoises (Malibu & Rum). I love living here and feel so lucky to be able to work in partnership for Walkeys. Could there be a better job than exercising with dogs? I never cease to be amazed by the different characters in each dog!